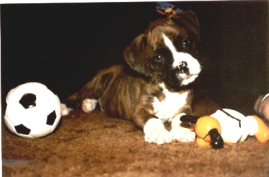 I was born on the 26th August 1996 in Redcar in the North East of England. My pedigree name is "Shukidou Lad", but my human parents call him Thai. The photo to the right is one of the very first, taken by his Dad. The two toys were at the time my favourites, Hong Kong Phooey and a ball which is only about 3 inches across so you can see how small I was

At that time I was the new recruit to the family, as they had another older dog called Toby, and two cats, Rambo and Fur-face. You can see them in the other pages of this site.

Sadly I passed away at the old age of 11 years on the 20th March 2008. They all miss me especially the young Kentou, but I have always been with them in their hearts and minds. Also now help out with this website!

Tribute to Thai – as told by his Dad 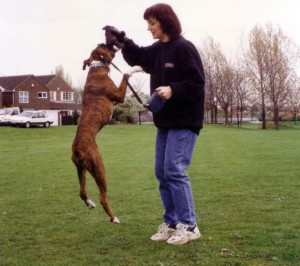 Thai jumps for his toy

Thai was the last of two boxers that were shown to us. He was so small that he fitted in my hand on the first day we held him at his mother’s home. Like most owners on seeing their dog for the first time, we fell in love with him straight away and could not wait to get him home.

He fitted in well at home, being looked after by us and our old dog, Toby, a Labrador Whippet cross. He made a close bond to him and as a consequence loved at black Labradors. Within the first few weeks Thai had problems with his skin. He was continuously scratching and rubbing his face to the point of making it bleed. He also developed stomach problems, and it took us a number of months, variety of food and a lot of patients to bring this under control. While doing this he was being tested for his skin complaint and eventually was diagnosed with 52 different allergies,

some of which included various grasses, pollen, dust mites, and human skin oils. So you can see that the poor lad had no chance of getting rid of his constant itching. However, he did get relief by being on medication for the rest of his life. At that stage it was estimated at around 7 years, he lived for 11 years. The medication would provide him with some comfort, but would eventually cause renal failure.

As parents we did not think about the length of time we had with Thai, we lived with him as we would with any dog. The only difference was that Thai became the vet’s number one patient. His problems did not stop him living a good life with us. He became our constant companion, going everywhere with us. He was a good natured dog, loved life, his food, his walks, his toys and games, and his home comforts which he got in every way!

Thai loved to take a toy on a walk, like his "Shakyman" playing one of his favourite games called "Tuggies".  This is where he would want you to hold one end and tug away at it until he got it from you or he would let go. You can see him in some pictures when he was a young pup.

Thai Tugging with his Shaky Toy. Got it now I'm off and running – you got to catch me if you want it!

One of his favourite toys was the Frisbee, he went everywhere with this. I remember one of his first walks he got hold of his Frisbee at the same time as Chris and there the war began. Who would let go first? Frisbee when going out on walks. He like to run after it as it was thrown and carry it wherever he went. But he would also love to play a game called “Tuggies”.

Thai was becoming a strong boxer dog, and they dragged one another across the whole of the first half of the riverside walk. Sometimes Thai pulling Chris, other times Chris pulling Thai. It eventually ended where Chris had won, but she was exhausted and suffered with a painful arm for the rest of the weekend. “Why didn’t you let go?” I said to her, “No way, I had to show him I was top dog.” She replied. But in reality I think Thai got bored and gave up!