The Bateman family boxers started with me, Thai, but before they had Toby. He was their son's dog, and he was a Whippet-Labrador cross.

I suppose you would call his bread now a Whipdor?

Tenjin don't be so daft! Now Tenjin's with me he might pipe in every now and again with silly comments.

I was 5 years old, and Toby showed me the ropes of being in the family, (well he was a boxer)Tenjin just keep quiet! I then passed these rules down to Kentou, and in turn he showed Tenjin. Below is me, Thai, as a sapling with the Old Man: 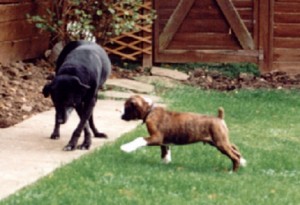 Toby and I really got on well and we had a very close relationship. So much so when Toby passed I became depressed until Kentou came along. I soon bucked him up! Yeah like I did with Kentou for you Thai! Please keep quiet Tenjin and let me tell the story!

Below is a picture of Me and our Mum on holiday taking a break: 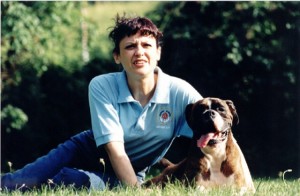 We used to go on holiday a lot this was in a cottage in Devon, before Dad got the Tent. Camping was great fun!

During these early years my parents had two cats as well, the black one was called Rambo, and the younger one Fur-Face. I know funny names, Rambo was named after the film, as apparently he scratched my Dad's finger and drew First Blood. Fur-Face, don't ask, he was called this because mum thought it was funny.

Below is Rambo in one of his favourite places to sleep, which was his radiator bed: 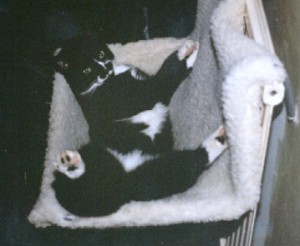 Here is Kentou, with the second cat called "Fur-Face. Nothing like being a bed but they were both comfortable.

Well aren't you going to mention me then?

Yes, I'm getting round to it. This is Tenjin resting his chin on Dad's foot. He was after something like a treat. He is also the one nagging in my left ear though out these pages in blue text. 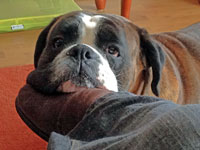 By the way Dad always gave in and got him a Jumbone! Yes and yummy they were too!