Over the years Kentou, Tenjin and myself have met some great friends, from people my parents know to the dogs at training, and from just going on holiday. Now Suki is a member, she too is starting to make friends. Below are some photo’s of just some of those that we have bounced around together.

He is a Doberman and a friend of Kemtou’s, but old I was not keen on him. He is very much like Kentou now as he is old but still getting by. He belongs to our parents friends, and they have another little dog called Joey. 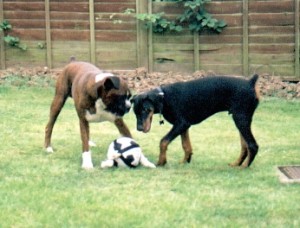 Here we are, Lukus and I playing football.
OK you Newcastle & I’m West Ham: One of the better moments with me playing footie. Or was it, “It’s my ball, so you can’t have it” says Thai? 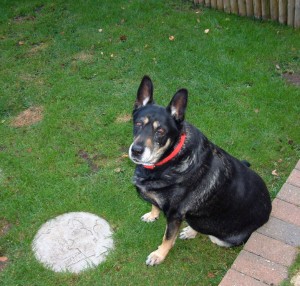 Here is a friend we made, but for a short time as poor Lambert was very old. My Mum use to call him “Fruit Bat” because of his ears; they are like satellite dishes. He was a nice kind guy! 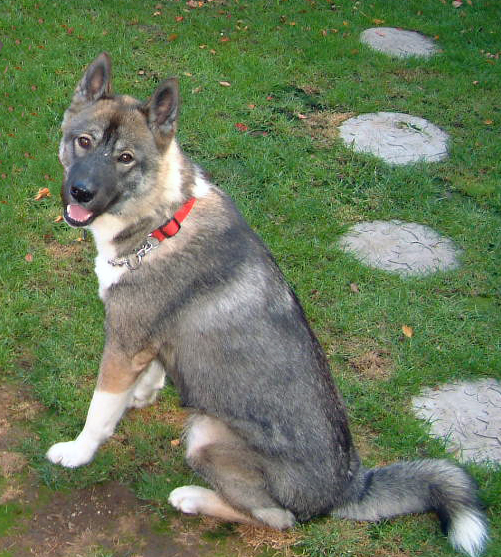 This is Storm a Husky-Aikita cross, she is a loving dog, but also very temperamental and didn’t get along very well with Tenjin. She went to a new owner and we no longer see her.

Here we are three Musketeers, Clockwise blow, Kentou, Storm and Me, Thai. We are in our garden waiting for my favourite treat – Boneo, Yummy!! 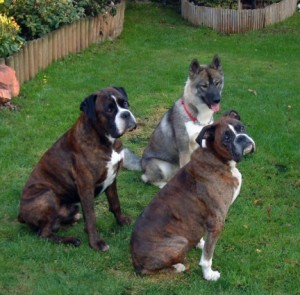 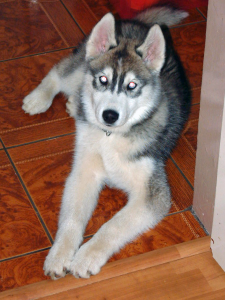 He was a smart lad, a Siberian Husky and not much older than Tenjin. He was a friendly chap! He belonged to my parents son, but sadly he could not keep him as he moved house. But he found him a great home with other Huskies. 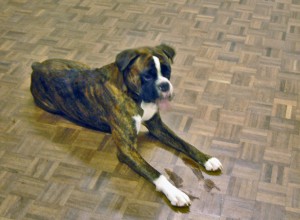 Rossi was a typical Boxer, lively, friendly and more often than not crazee. Sadly, as Tenjin did, he had a heart defect and died very young, but we remember him very well. He was Kentou’s nephew so was close to him. The owners of Rossi are like my parents Boxer mad – and so they should be we are great. They eventually got Tagzz. 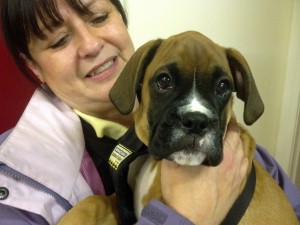 I think he is a Boxer crossed with a Kangaroo and he bounces around like Tigger. He loves meeting our parents and pee’s all over them in excitement. They are going to get some right laughs with him. Here he is with our mum when he was a small pup back in March 2012.

Stan is a Lurcher who belongs to our Mum & Dad’s friends. He has a great garden to play in and below you can see him with Suki playing chase. Stan is a great lad and very loving. He has friends too down in his garden in the form of chickens. He keeps taking his toys down there for them to play with.

This site uses Akismet to reduce spam. Learn how your comment data is processed.