This is Tenjin’s page where some moments in his life have been published. How he pulled this one off I don’t know? Not even Kentou and I manage to get our own little diary. I hope you enjoy it, and hope to let me know as I’d luv to tell Dad about it. You can reach me on my contact page; just send me, Thai, a note.

Enough Thai let them read all about me…Tenjin!

Now I’m with Thai I can butt in and write my own stuff, so here goes:

You can see me in the photo on the right, this was when I was very young and was the picture that convinced my parents to come for me at the place I was born.
Astoundingly I settled in very well and slept down at the side of the bed, on my Dad’s side since the first night with no crying. What a Hero if I do say so myself! However, by 5.10 am I was wide awake wanting to go to the loo. So I’d just had to wake the house up; as I say “One Up, All Up”. As a pup you can’t hold the amber nectar very long, so there was a mad rush of clothes going on from my parents and running down the stairs, this was quite funny, especially when Dad caught his big toe in the trouser leg and fell head first; luckily he landed on the bed.

I was clean by the first week at home, in fact only not making the back door 5 times in that first week. I blame Dad not being able to get dressed fast enough. You couldn’t beat that could you Kentou!

Then at 5 month’s old I managed to balance on three legs. Yes! That’s when I first cocked my leg, but at 7 months I was still squatting. In fact I still squat today, as I have only three legs, so I had some good training back then.

I remember my parent’s friends, who had a Boxer called Rossi, they bought me a toy that was to become one of my favourite toys. I still have it today, it’s called “wiggly-giggly” and it drives my parents, especially Dad as he has to play with me, insane! It’s great to start playing at around 9.30 pm and try to keep them going until 11 pm. Then again in the morning, with Mum, around 8.00 pm and early evening at 6.00 pm. Because of this wonderful toy my parents have bought me a whole range of toys to try and stop me with this nosy thing. He he it hasn’t’ worked, I just vary the toys now.

I had my first trip to look at the sea. We just had to go because my parents last dog, Thai, loved the sea. In fact he loved to put his paws into anything wet! Well they thought I’d be the same. In fact I loved paddling, but then these “waves” would come in and I’d run to the beach. I’m not a surfer dude you know. During my time on the beach I was allowed to do what us dogs do best (or second best any way) and that’s dig holes in the sand. I was just digging for my ball, covering myself and Kentou.

Here are some pictures of us on the Beach at this time – what great time this was: (Click to Open)

It was at this time in my life that I went very poorly with Kennel Cough.  Lucky for me though I got over this within 7 days of catching the illness. However, it was nothing to what was about to strike me later on.

Darlington has this long river that goes through it, called the River Skerne. Well although we used to walk around it, I never ventured in this river as my parents didn’t like us getting wet. I remember that on this day hot sunny day I just had to find out what it was like; so I just took off, headed straight for it. I hit the shallow water with an impact that it scared me silly and I just had to run straight out again. I turned and looked back on this river and thought to my self that it wasn’t that bad. So I walked in just enough to cover a part of my legs, and stood there soaking, not moving just in case soothing else happened. Took a lot of persuasion from Mum though to get me to turn round and even out. 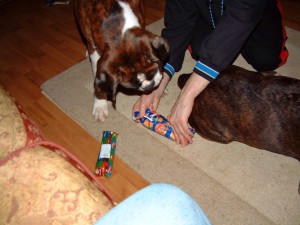 Learning how to unwrap presents

Kentou goes mad for Xmas he learnt this from Thai. By this time I was now beginning to like it too, as well as Birthdays.
My parents have this thing in the corner of the room that, although it doesn’t smell right, it looks like a tree. I want to cock my leg up it but they keep stopping me? Anyway they put these parcels underneath it the night before and Kentou goes crazy for them. Silly dog just lays there looking at them! The next morning when they get up Kentou just can’t wait to go down stairs to get his chops and teeth into this presents. At this time I didn’t understand what all the fuss was about, but now I too love ripping the paper off. We don’t care who presents they are, Christmas or Birthdays presents, we have great time in creating a mess.

What’s All this White Stuff?:

I remember the day when my outside world became covered in a white blanket. I was reluctant to put my paws on it, and when I did it was very cold, wet and soft. Bit like my nose. My parents called it Snow! It comes out of the sky in flakes which land every where but you can’t catch them because they disappear, just when you thought you got one in your mouth. I now like the stuff, when I went for walks I used to become a plough, head down, nose in and run like crazy pushing the snow up my face – great fun.

You humans do some funny things. I remember when Dad was ill and was coughing and spluttering all over the place. Well at night just before bed time he used to put this oinkment on him, or is it ointment? Any how it smelt awful, I think he called it a vapour rub? I couldn’t go near him, every time he came to me I screwed up my nose and run. He thought it was funny, could he not smell the horrid stuff?

Disaster Strikes with my health: 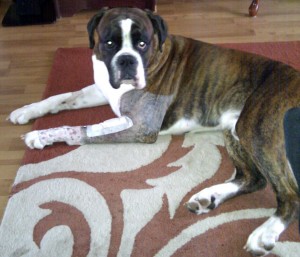 At 18 months old I went lame in the front left leg. The vets discovered I had a very aggressive Bone Cancer and had to operate to remove the bone. After a long discussion with the vet my parents decided to give me a bionic leg – a Titanium rod implant. In addition I had chemotherapy and was very ill for a couple of months, my parents slept with me down stairs in the living room. All was fine, I recovered and started using my new leg, then disaster struck the rod broke and my leg had to be removed. The positive side there was no cancer. Now I’m a three legged dog enjoying life thanks to my parents, although I can’t do things I could have done with 4 legs, but I’m great. 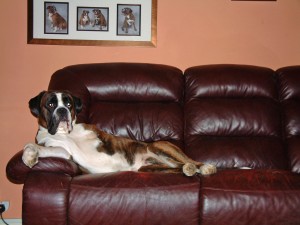 Relaxing in his favourite position – Dec 2011

In fact the vets were surprised that I lived through this as normally dogs die with this cancer and I’m still here after 4 years on. Sadly though I got cancer in my Lungs when I was 5 years old. This came as a big surprise after all that time and I eventually went across to meet the old lad Thai. 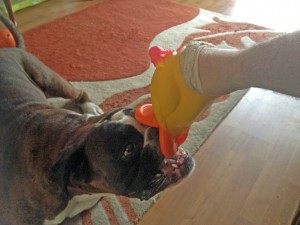 At 2011 Christmas my parents got me two toy heads that Dad can put his hand inside and play with me. Well I love these, I go mad shaking them with his hand inside, nearly shaking his arm off. I’m smart too because I know what their called. If Dad says go and get Bulldog Head out of the toy box I do, it seem to amuse him. But sometimes I get Duck-Duck instead, just to keep him on his toes.

Over the years our grass in the garden had become just a mud pit. Every time we go out there when it’s muddy our parents had to clean our paws when we came back in. It use to be good as we had them doing this quite a bit. They say something stupid like “you have brought in half the garden on your paws!” Well if that’s the case then Kentou would have brought in the other half and we would have had no garden left, wouldn’t we? You humans say funny things at times.

Get to the point Tenjin.

I will Kentou, just setting the scene like a good author. Well this summer, 2012, our parents had Astroturf laid. Looks like grass, feels like our carpet. But no more mud! I love running on it and laying down. So I’ve spent quite some time just stretched out in the garden, it’s great! Our parents love it too, as we don’t bring in half the garden any more, in fact our paws are clean. I wonder what they would do it I tried to dig a hole?

Better not Tenjin they would be too pleased.

I wont you stupid boxer, remember I’ve only got one front leg digger it is impossible for me now.

From time to time I entertain my Mum and Dad, buy watching the TV. Sit for some time, until animals comes on the screen then I’m up like crazy, bouncing and barking at the screen. Kentou can’t be bothered he has never taken and interest. My favourite programme is the Dog Whisperer with Cesar Milan. He has a lot of great dogs on his show that are mad too.