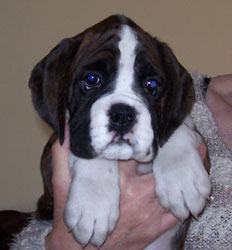 It was on the Tuesday 26th March 2013 that her new parents first saw Suki (was Rizo) on the website and immediately fell for her good looks. She was just over 16 weeks old, (Born 1st December 2012) and the last of the pups to be advertised by Slavanna Boxers. A phone call and discussion had them travelling down to Darby on the Easter Saturday 30th March 2013. Their meeting went extremely well and she was a bouncy bonnie girl pup. Mum and Dad have never had a female boxer before and were curious in their ways. But over the next few hours of having Suki at home that all disappeared. She settled in extremely well, meeting the “old Fella”, Kentou, who took to her very quickly and is now protective of her. Also waiting for her was Stuart, Sam and Alfie. Well all three dogs went off playing in the garden. Suki took to Alfie and made a new friend very quickly. Kentou nature had started to change because after loosing our Tenjin, Kentou was down in the dumps, and did not want to eat, play and would not stray far from Mum or Dad’s side during walks. Now he is back to his old self thanks’ to Suki! 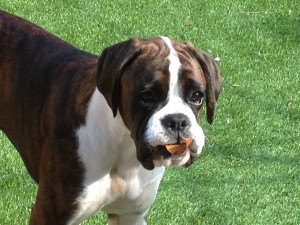 Mum and Dad feel extremely lucky to have her, as her breeder had already turned away four other offers before they came along. It was not until they had got home and looking through her family tree that Mum, had noticed Suki’s Granddad, on the father’s side, was Tenjin’s Dad. That means Tenjin would have been Suki’s Uncle! What a coincidence that Fate had brought Suki into Mum and Dad’s life whereby Suki was related to Tenjin, the dog they had recently lost to cancer. It feel like now Tenjin is still apart of the family in Suki.

Suki had her first BIG day on Easter Sunday, 31st March 2013, when she had many visitors. Rob, Morag and their daughter Beckie had come to pay a visit to see her. At the same time Stuart and Sa 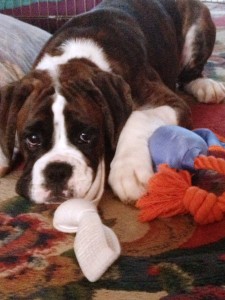 m, along with Stanley landed as well. Wow did she enjoy all this attention! Meeting these people and playing with Stanley. After a time they went home, but Stuart and Sam brought back their other dog, to play with her. She had a very busy afternoon, and slept well that evening.

On the 3rd April 3, 2013, Dad had just left for work when he had received a Text message from Mum: “She has just followed Stuart up stairs. Now we are in trouble and have to keep a close eye on her.” Up until then she could not clime the stairs! When Dad had phoned back, Mum said that she had made a stair gate to prevent her going up, as at present she can’t come down them, not without rolling and bouncing anyway.

On the 10th April, Dad spotted her chewing and thought she should not have had anything to chew immediately said to her “what have you got?” Upon inspection he found that she was trying to eat one of her own baby tooth that has fallen out. It was the very first time Dad had seen a lost baby tooth.

She is very good on the lead and loves going for walks. In fact she has only been with us a few days and has learnt to halt and sit at the edge of the pavement on walks.

When she goes out for a walk she likes to get hold of her lead and run with it. So Dad took a Ball for her to play with. This worked for about 5 minutes then she kept dropping it and got hold of her lead.